James Ponti with City Spies: City of the Dead 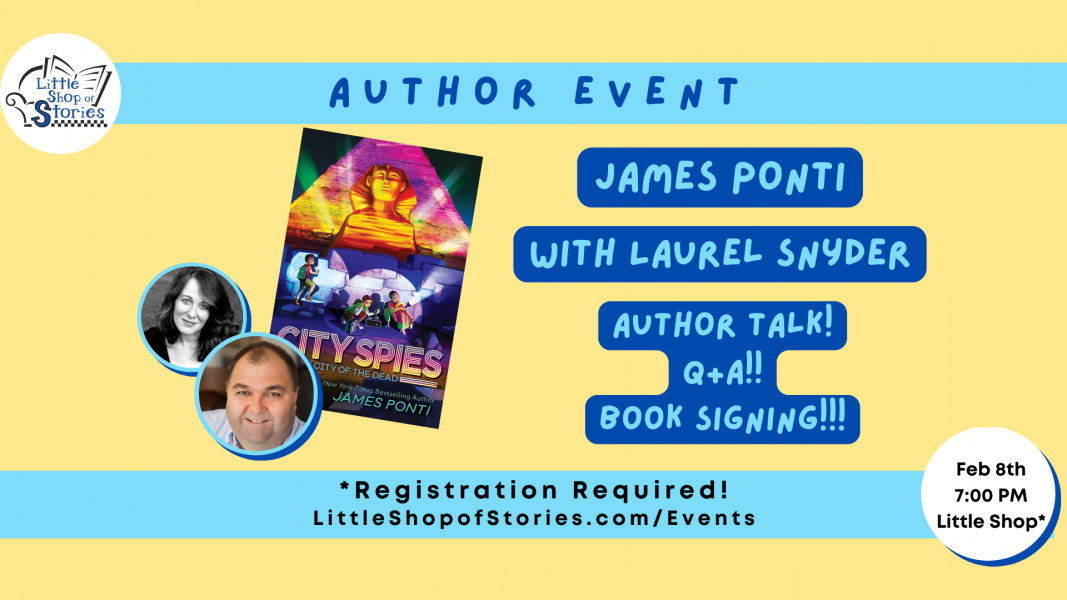 RED ALERT RED ALERT: Agents, James Ponti and Laurel Snyder, are in desperate need of attendees at their event with Little Shop!

A﻿ttention all agents, sleuths, and those with a keen eye, fleet feet, and a love of reading: amazing author, James Ponti, is touching down here in Decatur for a very special event to celebrate the release of the newest book in the beloved City Spies series: City of the Dead!! James won't be taking on this special assignment alone, however. He's bringing back up, fellow author Laurel Snyder, to help spill the beans on this exciting new book, answer questions from the audience, and sign many, many books! Your mission, should you choose to accept it: attend the event in your best spy outfit, meet James and Laurel, pick up your very own copy of City Spies: City of the Dead, and have the time of your life!! This message will self-destruct in 10 seconds.

A﻿dmission: $0! That's right, it's free to attend this event! However, you still need to "purchase" a ticket here for every person in your group!

I﻿f you would like a signed copy of the book, but can't attend the event, please order a copy below!

M﻿asks are optional in the downstairs shop, but required in our event space!

Codename Kathmandu, better known as Kat, loves logic and order, has a favorite eight-digit number, and can spot a pattern from a mile away. So when a series of cyberattacks hits key locations in London while the spies are testing security for the British Museum, it’s clear that Kat’s skill for finding reason in what seems like randomness makes her the perfect candidate to lead the job.

And while the team follows the deciphered messages to Egypt and the ancient City of the Dead to discover who is behind the attacks and why, Kat soon realizes that there’s another layer to the mystery.

With more players, more clues, and involving higher levels of British Intelligence than ever before, this mission is one of the most complex that the group has faced to date. And it’s also going to bring about a change to the City Spies…

James Ponti (he/him/his) is the New York Times bestselling author of three middle grade book series: City Spies, about an unlikely squad of five kids from around the world who form an elite MI6 Spy Team; the Edgar Award–winning Framed! series, about a pair of tweens who solve mysteries in Washington, DC; and the Dead City trilogy, about a secret society that polices the undead living beneath Manhattan. His books have appeared on more than fifteen different state award lists and he is the founder of a writers group known as the Renegades of Middle Grade. James is also an Emmy–nominated television writer and producer who has worked for many networks includingNickelodeon, Disney Channel, PBS, History, and Spike TV, as well as NBC Sports. He lives with his family in Orlando, Florida. Find out more at JamesPonti.com.

In this fourth installment in the New York Times bestselling series from Edgar Award winner James Ponti, the young group of spies go codebreaking in Cairo in another international adventure perfect for fans of Spy School and Mrs.

In this third “thrilling” (Kirkus Reviews) installment in the New York Times bestselling series from Edgar Award winner James Ponti, the young group of spies help a fellow agent in another international adventure perfect for fans of Spy School and Mrs.

In this second installment in the New York Times bestselling series from Edgar Award winner James Ponti, the young group of spies returns for another international adventure perfect for fans of Spy School and Mrs.

A New York Times bestseller!
A GMA3 Summer Reading Squad Selection!
“Ingeniously plotted, and a grin-inducing delight.” —People
“Will keep young readers glued to the page…So when do I get the sequel?” —Beth McMullen, author of Mrs.

In this thrilling and bestselling series Stuart Gibbs called “a must-read” from Edgar Award winner James Ponti, five kids from all over the world become real-life spies—perfect for fans of Spy School and Mrs. Smith’s Spy School for Girls. The first three books are now together in a collectible hardcover boxed set!

Sara Martinez is a hacker.