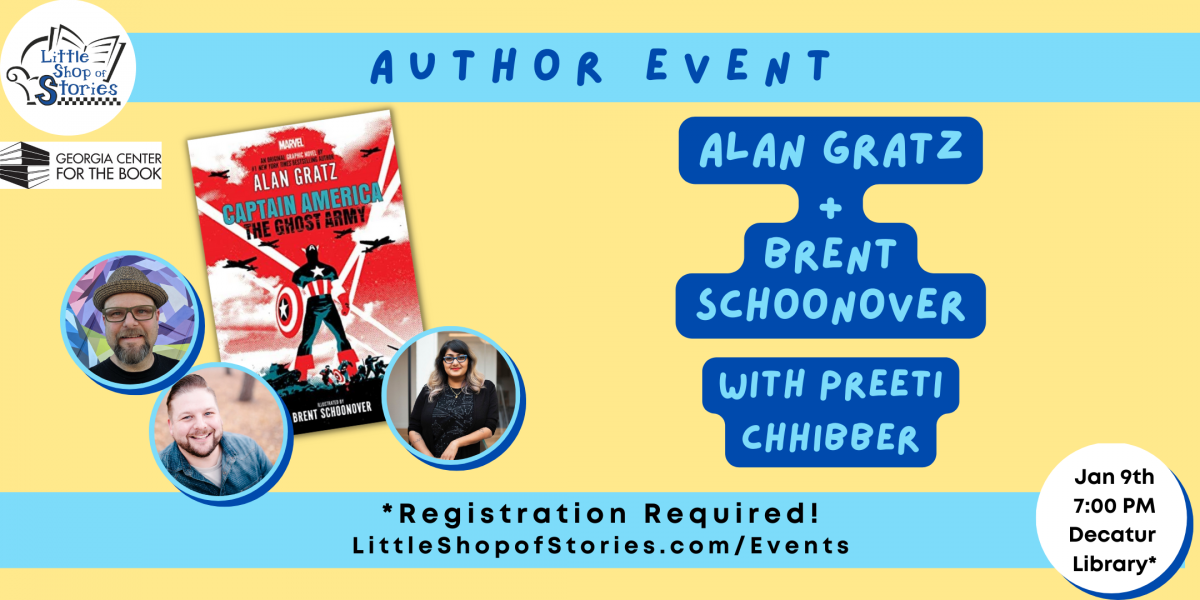 B﻿OOK LOVERS ASSEMBLE!!! Little Shop and Georgia Center for the Book need YOU to come save the day at our event with Alan Gratz on January 9th at 7:00PM! Your mission: dress up as your favorite superhero for our costume contest, bring in your beautiful fan art for Little Shop to display around the library, participate in Marvel trivia, and (most crucial of all) listen to Alan Gratz and Brent Schoonover talk about their new graphic novel, Captain America: The Ghost Army with fellow author Preeti Chhibber. See below for more details on how you can sign up to accept your mission and save Decatur with your bookishness!!

A﻿dmission: $0! That's right, admission is free! However, you still need to "purchase" a ticket for every person in your group (ex: a family of four needs four tickets)

P﻿re-order a copy of Captain America: The Ghost Army: $14.99 below. You must purchase a book in order to enter the signing line.

If you are unable to attend this event, but would like a signed copy of the book, please order your book below!

T﻿he doors to the auditorium are through the lower level of the parking deck.

It’s World War II, and Captain America and his sidekick Bucky Barnes are fighting the good fight against the Nazis in the Eastern European nation of Transia. Just when they and their British allies are about to be overwhelmed by the enemy, they’re saved by the United States Ghost Army—a real American unit from World War II made up of artists, actors, sound engineers, and advertising professionals who used inflatable tanks, giant loudspeakers, fake radio transmissions, and other props and tricks to deceive the Axis powers.

But the German army has a Ghost Army of its own–and theirs are the floating, undead, kill-you-with-a-death-touch kind of ghosts! They arise from their graves at night, attack, and disappear again as quickly as they appeared. Worse, the Nazi Ghost Army is impervious to bullets, bombs, and everything else the Allies throw at them—including Cap’s famous shield.

How can Cap and Bucky fight something that’s already dead? And just what does the mysterious Baron Mordo—sitting in his castle atop nearby Wundagore Mountain—have to do with all this?

A﻿bout the Author, Illustrator, and Moderator

Alan Gratz is the #1 New York Times bestselling author of seventeen novels for young readers, including Two Degrees, Ground Zero, Refugee, Allies, Prisoner B-3087, Projekt 1065, and Ban This Book. A Knoxville, Tennessee native, Alan is now a full-time writer living in Asheville, North Carolina with his wife and daughter. Learn more about him online at www.alangratz.com.

Brent Schoonover is a Midwestern-born illustrator who works in the fields of comic books and commercial art, having done projects for clients such as Target, Continental Airlines, Mayo Clinic, and the NFL. In the field of comics, Brent has worked on several creator-owned projects like Devil’s Highway from AWA, as well as on well-known characters such as Batman and Superman at DC Comics, and X-Men, Ant-Man, Captain Marvel, and Black Widow at Marvel Comics. He currently lives in Minneapolis with his wife, Nicole; two daughters, Millie and Josie; and their bulldog, Agatha.

Called “Spider-Man super fan and author” by Publishers Weekly, Preeti Chhibber is a YA author, speaker, and freelance writer. She has written for SYFY, Polygon, BookRiot, BookRiot Comics, The Nerds of Color, and The Mary Sue, among others. The first book in her original Spider-Man trilogy, Spider-Man’s Social Dilemma came out in July 2022, and the latest installment of her Avengers Assembly series, X-Change Students 101 released in September 2022. She also co-hosts the podcasts Desi Geek Girls and Tar Valon or Bust. She’s appeared on several panels at New York Comic Con, San Diego Comic Con, and on screen on the SYFY Network. Honestly, you probably recognize her from one of several BuzzFeed “look at these tweets” twitter lists. She usually spends her time reading a ridiculous amount of Young Adult books, but is also ready to jump into most fandoms at a moment’s notice.

In this thrilling historical adventure set during World War II, Steve Rogers (AKA Captain America) and his young sidekick, Bucky Barnes, encounter threat like none they've ever seen -- a Ghost Army.